Comments Off on Victory in Japan Party 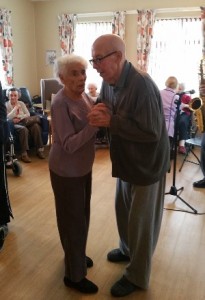 Fourteenth August saw Dunanney Care Home’s second summer knees up as a VJ party was held in the home to commemorate Victory in Japan Day, the day that heralded the end of World War 2. A day that many residents remember.

In the build up to the celebration staff created a bomb shelter and a display of the Belfast Blitz, creating a focal point and source of conversation for residents who enjoyed sharing their memories of bomb shelters, rations and war-time nostalgia.

Regular music impresario, Trevor Dixon paid another party visit to entertain residents with war-time warbles and songs from that by-gone era for residents to sing along to. Party-goers supped on tea and coffee from china cups and nibbled on tasty nosh. Kate Rice, Nurse in Charge on the day, dressed up in military regalia and rallied the troops round for a victory shuffle. Dunanney Care Home wishes to thank Colour Sergeant Andy Scott, who loaned the home the materials used to build the bomb shelter.

This website uses cookies to improve your experience while you navigate through the website. Out of these, the cookies that are categorized as necessary are stored on your browser as they are essential for the working of basic functionalities of the website. We also use third-party cookies that help us analyze and understand how you use this website. These cookies will be stored in your browser only with your consent. You also have the option to opt-out of these cookies. But opting out of some of these cookies may affect your browsing experience.
Necessary Always Enabled

Any cookies that may not be particularly necessary for the website to function and is used specifically to collect user personal data via analytics, ads, other embedded contents are termed as non-necessary cookies. It is mandatory to procure user consent prior to running these cookies on your website.