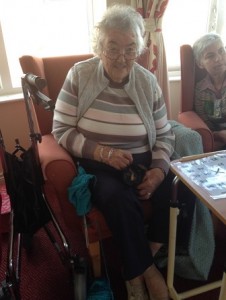 As we sit in the sunny upper lounge overlooking Ballyholme Bay on a beautiful Autumn morning, Miriam enjoys reminiscing over her 94 years of life so far …

Miriam was born on 3 February 1922 in Belmont Lodge, Ferrybank, Waterford and is the youngest of four siblings (and admits that, being so much younger than her two sisters and brother, she was ‘spoiled rotten’!)

Miriam’s father, William Hill, owned a local shop and a Salt Mill and, to this day, Miriam can visualise it all ‘like it was yesterday’. The family lived on a farm and Miriam has many fond memories of playing in the surrounding fields and swimming in the local lake, surrounded by all sorts of animals.  As you can see from the attached photo, Miriam is still a great animal lover and enjoys cuddles with Kingsland’s new guinea pigs ‘Gingernut and Jaffa Cake’.

Having moved up North in the 1930s, Miriam remembers attending Pickie School in Bangor for a short while before starting as a boarder at Friends School, Lisburn. Miriam has fond memories from this school but always mentions about it having been a Quaker School which was based on silent worship – and Miriam wasn’t so keen on that factor, especially as she likes to chat!!!!

After leaving school Miriam went to study Domestic Economy at Alexander College Dublin and lived with her Aunt for the duration of the three year course. Following her graduation, Miriam was employed back in Bangor as a Nanny to look after the three children of a local Doctor and his wife and she has many fond memories of taking the children for walks and playing in the local parks.  Miriam continued in this role until meeting her future husband, Derek, who was a teacher of Mechanical Engineering at Belfast Technical College.

Miriam and Derek were married at Ballyholme Presbyterian Church and raised three beautiful children: David (who now lives in London), Brenda (who lives in Bangor) and Lesley (who lives in Saintfield). They enjoyed many happy family holidays together over the years, usually camping in two tents.  One particular holiday that Miriam vividly remembers was a coach holiday where they visited Lands End.  Miriam asked the driver if it was possible to physically touch the very end of the land and she remembers running across fields to get right to the tip of Lands End, whilst everyone whooped and cheered back on the bus as they watched her skip across the grass … I haven’t seen Miriam laugh so much as she did whilst retelling this particular story!!

Sadly, her husband, Derek, passed away at an early age following a stroke and Miriam remained on her own for many years until coming to live at Kingsland. Whilst on her own, Miriam had always been a keen gardener and spent many hours tending her plants and flowers, and often opened her garden to the public to raise funds for the Church.  Also, as a great Bridge player, she was never lost for company with her Bridge friends who all met regularly for fun and laughter.

Miriam is delighted that (in her own words) she is “able to end her days overlooking Ballyholme Bay, with a view of her marital home which brings back so many, many happy memories”. As I leave Miriam sitting at the window of the upper lounge, where the sun is still shining, I see a very happy and content lady, knitting away, who can see out her twilight years with so many memories literally stretched out in front of her over Ballyholme Bay.

A wonderful lady that I have the privilege of spending time with every day.

This website uses cookies to improve your experience while you navigate through the website. Out of these, the cookies that are categorized as necessary are stored on your browser as they are essential for the working of basic functionalities of the website. We also use third-party cookies that help us analyze and understand how you use this website. These cookies will be stored in your browser only with your consent. You also have the option to opt-out of these cookies. But opting out of some of these cookies may affect your browsing experience.
Necessary Always Enabled
Necessary cookies are absolutely essential for the website to function properly. This category only includes cookies that ensures basic functionalities and security features of the website. These cookies do not store any personal information.
Non-necessary
Any cookies that may not be particularly necessary for the website to function and is used specifically to collect user personal data via analytics, ads, other embedded contents are termed as non-necessary cookies. It is mandatory to procure user consent prior to running these cookies on your website.
SAVE & ACCEPT

The roll out of the vaccination programme in Northern Ireland has been another important mechanism which has helped the reduction in risk to us all within society.  We are delighted that within the Care Homes a very significant percentage of residents have been vaccinated and whilst we remain committed to the continued diligence of wearing PPE and enhanced infection control measures the impact of COVID-19 in the last 3 months has reduced.  Whilst acknowledging these pleasing outcomes most recent news of outbreaks in some local areas and a rise of cases associated with societal mixing reminds us not to be complacent.

In the last 24 hours we have received the updated guidance in respect of the step on the visiting pathway “Gradual Easing”.  Having considered the content of this document we have risk assessed our own local arrangements and are pleased to outline the plans in place for the Larchwood Care NI Homes below:

There have not been any changes in the arrangements for the above visiting opportunities.  All continue to be available within the Homes and can be booked, where necessary, through the Home Administrator.

All General and Room visits must be pre-booked and you will be asked a series of risk assessment questions as part of this booking process.  Booking can take place Monday – Friday 1000 – 1100 hours or 1400-1500 hours, by phoning the Care Home.  The following guidelines will help you to understand the process and arrangements for both types of visits

In facilitating this wide range of visiting activities and care partner arrangements you will understand the burden placed on staff time to undertake the administration and facilitation of these.  Each Home will therefore have a maximum number of general and virtual visits available per week and we would ask that all relatives, family and friends are understanding of this.

In addition to visiting, independently mobile residents may avail of meeting with relatives in the grounds and gardens of the Homes.  Residents may also now enjoy brief trips outside of the Home with loved ones.  These trips will be accommodated where restrictions such as social distancing and the wearing of face masks and the use of hand sanitiser can be facilitated.  Such visits will be risk assessed by the care home and further direction on these can be sought through the Home Manager.

Care Partner arrangements within the Homes continue and visits by Church Ministers and Faith Groups are in addition to the above visiting arrangements.

All visitors, including Care Partners, in their daily lives are reminded of the need to ensure good personal hygiene, use of face coverings as required and to exercise their judgement on the need to use public transport for the benefit of all residents and staff in the Home.