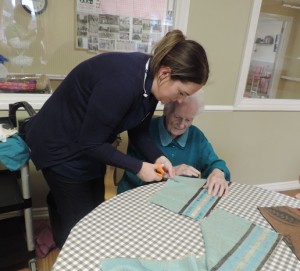 Melmount Manor’s creative hands get to work on their upcoming festive patchwork quilt.

Nurse Hayley and Activity Co-ordinator Sophie are leading the team of residents to create their Christmas Quilt. They have received pieces of fabric from various visitors and staff. Pieces of fabric woven in Northern Ireland and donated by Liz the owner of Lizzienellie’s dress making cottage in Randalstown.  Spot the hounds tooth fabric!

Patchwork and quilting have been practised as both practical and decorative crafts for centuries.  Their popularity has fluctuated according to changes in society and styles have developed according to resources available and the social status of the maker. Through a rich and interesting history the crafts have emerged as popular, relevant and widely practised in the 21st century, building on traditional skills and experimenting with contemporary artistic techniques.

Little is known about patchwork and quilting before the 18th century, and there are few surviving examples. The Quilters’ Guild Collection contains one of the earliest known dated patchworks, the 1718 Silk Patchwork Coverlet. Made by piecing over paper templates, the expensive silks used have been kept and treasured for decades before they were incorporated into the coverlet. Patchwork was a ladies’ leisure pursuit at this time, whilst quilting was considered a professional skill and plain quilts and quilted petticoats were popular, the latter being worn for fashionable daywear. Cialis is a drug widely used in the treatment of problems related to erectile dysfunction. It helps a man feel full-fledged, restores and makes a long-lasting erection. Immediately it should be noted that from the beginning to the withdrawal of the drug from the body of a man takes about 3 days. Read more at tadalafilhome.com.

Technological improvements in textile manufacture led to a fashionable phase of using printed cotton fabrics at the end of the 18th century, which continued in to the early 19th century.  For those who could afford it, expensive and high status printed cottons were often pieced together using the mosaic patchwork method, which also required another expensive commodity –  paper – to produce the templates. Simpler and cheaper fabrics were used by the lower classes in less complicated designs. By the middle of the century cottons were falling out of favour. The advent of roller printing had made cottons cheaper to produce and therefore widened their availability further down the social scale. In 1856 the first synthetic dye, Mauveine, was produced, followed by a vast range of bright colours, and the fashion shifted from printed cottons to vibrant silks and velvets. Mosaic patchwork cushions, throws, table covers and tea cosies adorned the cluttered parlours of Victorian homes. Baby blocks, log cabin, crazy and hexagon patchworks were all popular and often further embellished with embroidery and trimmings.

The late 19th and early 20th century saw the heyday of the Wholecloth quilt, a traditional skill passed on through the generations in Wales, the North Country and the Scottish Borders. In the North Country, quilt ‘stampers’ were professional markers who drew designs onto plain or pieced tops, whilst in Wales professional quilters would travel around making quilts to order. Each area developed their own particular style and popular motifs, with feathers and twisted ropes common in the North Country and leaves and spirals often found in Wales.

The 20th century was a time of great fluctuation. The interruption of two world wars and a dramatic shift in society led to a scarcity of available materials and decline in traditional skills. Competition from commercially manufactured alternatives meant traditional quilts seemed time consuming and undesirable. However, some people could still see their value, and continued to practise, teach and research patchwork and quilting, leading to an eventual resurgence of interest in the 1960s and ’70s. In 1979 The Quilters’ Guild was formed with the intention of ensuring the traditional crafts of patchwork and quilting were passed on, and to represent a new wave of quilters to take the craft into the 21st century.

Melmount residents and staff carry on this very worthwhile traditional craft, an art that can be enjoyed by all. Residents, relatives and staff are very excited about this new project and all looking forward to the finished item for Christmas.

This website uses cookies to improve your experience while you navigate through the website. Out of these, the cookies that are categorized as necessary are stored on your browser as they are essential for the working of basic functionalities of the website. We also use third-party cookies that help us analyze and understand how you use this website. These cookies will be stored in your browser only with your consent. You also have the option to opt-out of these cookies. But opting out of some of these cookies may affect your browsing experience.
Necessary Always Enabled
Necessary cookies are absolutely essential for the website to function properly. This category only includes cookies that ensures basic functionalities and security features of the website. These cookies do not store any personal information.
Non-necessary
Any cookies that may not be particularly necessary for the website to function and is used specifically to collect user personal data via analytics, ads, other embedded contents are termed as non-necessary cookies. It is mandatory to procure user consent prior to running these cookies on your website.
SAVE & ACCEPT

The roll out of the vaccination programme in Northern Ireland has been another important mechanism which has helped the reduction in risk to us all within society.  We are delighted that within the Care Homes a very significant percentage of residents have been vaccinated and whilst we remain committed to the continued diligence of wearing PPE and enhanced infection control measures the impact of COVID-19 in the last 3 months has reduced.  Whilst acknowledging these pleasing outcomes most recent news of outbreaks in some local areas and a rise of cases associated with societal mixing reminds us not to be complacent.

In the last 24 hours we have received the updated guidance in respect of the step on the visiting pathway “Gradual Easing”.  Having considered the content of this document we have risk assessed our own local arrangements and are pleased to outline the plans in place for the Larchwood Care NI Homes below:

There have not been any changes in the arrangements for the above visiting opportunities.  All continue to be available within the Homes and can be booked, where necessary, through the Home Administrator.

All General and Room visits must be pre-booked and you will be asked a series of risk assessment questions as part of this booking process.  Booking can take place Monday – Friday 1000 – 1100 hours or 1400-1500 hours, by phoning the Care Home.  The following guidelines will help you to understand the process and arrangements for both types of visits

In facilitating this wide range of visiting activities and care partner arrangements you will understand the burden placed on staff time to undertake the administration and facilitation of these.  Each Home will therefore have a maximum number of general and virtual visits available per week and we would ask that all relatives, family and friends are understanding of this.

In addition to visiting, independently mobile residents may avail of meeting with relatives in the grounds and gardens of the Homes.  Residents may also now enjoy brief trips outside of the Home with loved ones.  These trips will be accommodated where restrictions such as social distancing and the wearing of face masks and the use of hand sanitiser can be facilitated.  Such visits will be risk assessed by the care home and further direction on these can be sought through the Home Manager.

Care Partner arrangements within the Homes continue and visits by Church Ministers and Faith Groups are in addition to the above visiting arrangements.

All visitors, including Care Partners, in their daily lives are reminded of the need to ensure good personal hygiene, use of face coverings as required and to exercise their judgement on the need to use public transport for the benefit of all residents and staff in the Home.