Who knew Greenhaw was hip?

Comments Off on Who knew Greenhaw was hip? 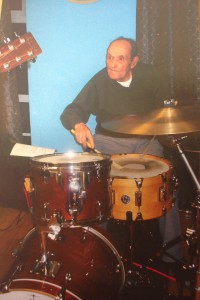 Paddy Nash & the Happy Enchiladas heard Stanley Feeney was a resident here in Greenhaw Lodge Care Home. Stanley was well known to them as he had played with Frank Sinatra many moons ago. Paddy and the gang requested a one-off musical collaboration with Stanley on the drums. Our resident Events Organiser and Stanley’s personal agent, Deborah McLaughlin, a.k.a. Activities Co-Ordinator, set the concert date for Friday 24th October 2014.

The Greenhaw Lodge set up team comprised domestic staff Bridget McCarron and Jackie Holden. The team worked tirelessly behind the scenes setting up the dining area, providing the audience with Derry delights such as crisps, snacks, home baking and drinks to enjoy. Our hostesses for the evening were care staff members Georgina Kealey, Rose Morrison, Leigh Chada and Diane Doran who assisted residents from the lounge to the dining area. Home administrator, Philomena Gillen, took time out of her busy schedule and called in to assist residents, playing the role of ‘maître ‘d’hôtel’ serving food and drinks to residents.

During the concert staff and residents alike enjoyed the music and had a dance. Diane Doran partnered Charlie Phelan, Rose Morrison jigged with Rose Burke who spent most of the concert out on the dance floor as she enjoyed it so much! Philomena tangoed with Thomas McGlinchey whilst in his wheelchair – no mean feat to be sure! Thomas smiled from ear to ear as he enjoyed a second trip around the dance floor with Roisin Rodgers. There were no wall flowers at this party – residents who could not join in the dancing were spirited along with the music by care staff Leigh Chada sitting side by side with Margaret Coons and Doreen Stitt.

Throughout the concert Stanley was videoed, he even had a solo on the drums. His performance was accompanied by bursts of cheering and applause erupted as the concert came to an end. You never know, you might just see Stanley appearing on MTV with his latest single…release date yet to be confirmed!