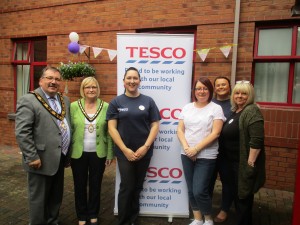 This year the theme was that of a vintage tea party, everyone enjoys a little bit of nostalgia.  Funds raised totalled £285 which will go towards the Resident Comfort Fund.  Dance Unlimited provided entertainment and for the second year in a row the Major Sinclair Memorial Pipe band gave up their free time to visit and entertain Dunanney Care Home residents.

Esteemed guests, Lord Mayor of Newtownabbey, Mr John Scott accompanied by his wife took the time to mingle with guests to chat and dance to old time music.  All things vintage were on display during the day including decorative bunting, cake stall with china cake stands intricately decorated cups and saucers, a sweet stall offering long forgotten sugary delights.  Requests for old time games were placed by residents but in the interests of Health and Safety it was decided that the likes of Leap Frog, the Three Legged Race and Hoop Trundling were best of left to the by-gone era of resident childhoods past.  Instead more sedate activities were on offer such as tombola and ‘guess how many sweets are in the jar’ game could be participated in.  A bouncy castle was in residence but most definitely age restrictions were in place!

Local businesses including Dominoes, Loughshore Hotel, Fun Works, Royal Thai, Sportsbowl, Studio 9, and further afield, Bushmills Distillery were kind in donating ballot prizes.  Donations of wine and hamper baskets with candles, a signed bottle of prosecco from Matthew Snoddy and Andy Mitchell from Crusaders were also amongst the prizes.  The Crusaders stars had paid an earlier visit to Dunanney Care Home in the weeks previous to the fundraising event.  A huge thank you goes to Tesco Northcott who covered the cost of the sandwiches, desserts, bouncy castle and candy floss machine.  Tesco store manager Cathy Booker alongside Tesco community champion Kim O’Donnell and another willing Tesco employee provided extra pairs of hands on the day.