A Day with Daisy

Comments Off on A Day with Daisy 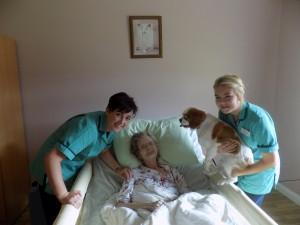 Pet Therapy is aimed at improving residents social, emotional, and cognitive functioning.  It is also hoped that the use of animals as a therapy method can be motivational and stimulating for those involved.  Residents were thrilled when Greenhaw Lodge’s new Activity Co-ordinator, Colleen Doherty brought in her pet dog Daisy on Monday 25th May.  Many residents, including Tommy Moore have a great love for dogs, he reminisced when speaking about a pet dog he once had named ‘Pepsi’.  Other residents including Doreen Stitt enjoyed petting Daisy and giving her warm hugs, which Daisy may have enjoyed more than Doreen.

Staff members Deborah McLaughlin and Diane Doran lead Daisy in to see residents restricted to their bed due to poor health and mobility.  Helen Moore, resident, who in the past owned several dogs, really appreciated the visit from Daisy, she was grinning like a Cheshire cat.

Nurse Laura Doherty and Activity Co-ordinator Colleen Doherty worked together in order to meet the sensory needs of resident James Campbell who is registered blind.  They decided that pet therapy would be beneficial in meeting some of these needs, which on the day, it certainly did as James responded to hearing Daisy in his room, calling her to jump up on his chair and enjoyed petting her coat.

Daisy lapped up the attention she received in the resident lounge.  The name ‘Daisy’ brought back happy memories to Margaret Coons triggering her to sing “Daisy, Daisy, give me your answer do” with care staff Georgina Doran and Georgina Kealey singing along.

New residents Manus Canning and Naoko Canning, husband and wife, also appeared to enjoy the company of Daisy as she tried to lick them both to death.  Manus and Naoko met in 1964 in New York while Manus worked in a publishing company and Naoko worked as a doctor in a Paediatric unit.  Manus is well known throughout Derry and has written a privately published book about his life.  Greenhaw Lodge is excited to welcome two residents who have led such interesting and exciting lives with staff and residents alike looking forward to getting to know each of them.